I’m always eager for March to end. March is like the Wednesday of the academic year, it’s the middle of the winter holidays and the end of the spring semester. I still feel this way despite not being in school this year. I didn’t take a vacation during Christmas and New Year’s but my Gemini job ends April 30th and I have a blissfully empty summer schedule before I start my last year of school in the fall.

There are many things that I’m excited about this April. The second season of Game of Thrones, it’s no longer March, less than two months now until Joe and I leave Hawaii and go home. But mostly, I’m thrilled about starting to work on my senior thesis. I’m going back to Bennington for my final year after spending a year at UMass so I feel like I need to start early so I have a solid foundation for when I get back.

There is a new full time astronomy and physics professor at Bennington this year, Hugh, who will be my thesis advisor. I haven’t met him but we’ve emailed about the project that I’m interested in. It doesn’t have anything to do with his work which he’s fine with this as long as I can find an expert in the field who is willing to act as a second advisor.

Working at Gemini has been amazing in this regard. I have met so many people who are doing such awesome things in their field. I met Bernadette, who works in the south, at the Hilo Burger Joint during after-soccer drinks while she was visiting Hilo for a few days a couple months ago. Bernadette was the first author of the paper on RR Tau that we at Maria Mitchell based many of our assumptions on for the spectral monitoring program for UXors.

Of course I had to talk to her. We had actually met the previous year at the AAS meeting in Seattle and she remembered me and my poster. She thought it was good! Over our beers and burgers I told her I wanted to expand on the results of the paper for my senior work, she said that she had high resolution Keck spectra of RR Tau that she never published and the first steps toward collaboration were made.

I sent her my paper the next day and just this week we finally got around to talking again. She’s back in Chile so we polycom’d and it was all very fancy. It ended up being a wonderfully productive conversation, I came in with an idea of what I want to do for my thesis and Bernadette was very helpful in pointing out papers and authors I should look into.

Instead of making you read my paper I’ll summarize it. UXors are a subclass of T Tauri stars. They experience pronounced and non periodic dimming in continuum light. Their mechanism of variability has been disputed for decades now. UXors have had a lot of photometric monitoring done on them but they have not been studied spectroscopically nearly as much. One of the advantages that Bernadette’s project is that she had spectroscopy.

While I was working at Maria Mitchell Observatory Vladimir, the director, developed a method of extracting the H-Alpha line from continuum, my role was to help the development and employment. The method involves two narrowband interference filters: one that is centered at the H-Alpha line and the other that sits in the continuum but overlaps with the H-Alpha line 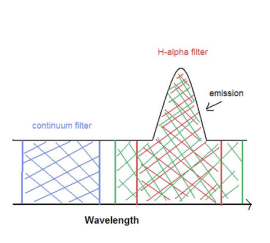 and basically subtracting the flux of the continuum filter from the H-Alpha filter. This meant that we could look at the temporal changes of the H-Alpha emission line and compare it to the evolution of continuum over time.

The insight that this led us to is that while the H-Alpha lives a life separate from continuum on short term time scales they correlate on long time scales (~100 days). This means that there is possibly a second mechanism of variability that has different effects than what causes the short term.

So, what I want to do for my senior thesis is explore that second mechanism of variability. In Bernadette’s paper she and her co authors claim that the H-Alpha line is not correlated to photometric variability but they didn’t know about what was happening on longer time scales since they were just using spectra.

They also claim that the [O I] forbidden line is not affected by the changes in continuum but I feel that conclusion, like that of H-Alpha, suffers from not knowing about the second driver of variability. I want to see if I can associate the [O I] line with the long term variations. This would be significant because [O I] is indicative of stellar winds. If [O I] relates to long term continuum changes than that might mean that some wind is kicking up dust or the like and obscuring the star.

Bernadette and I talked about applying for telescope time through Gemini’s Poor Weather program. RR Tau is bright enough that we could get good spectra even when RR Tau is at a minimum and Poor Weather is an undersubscribed program so I’m likely to get time on the sky. I also want to email Vladimir about what he’s doing with RR Tau and UXors since I left.